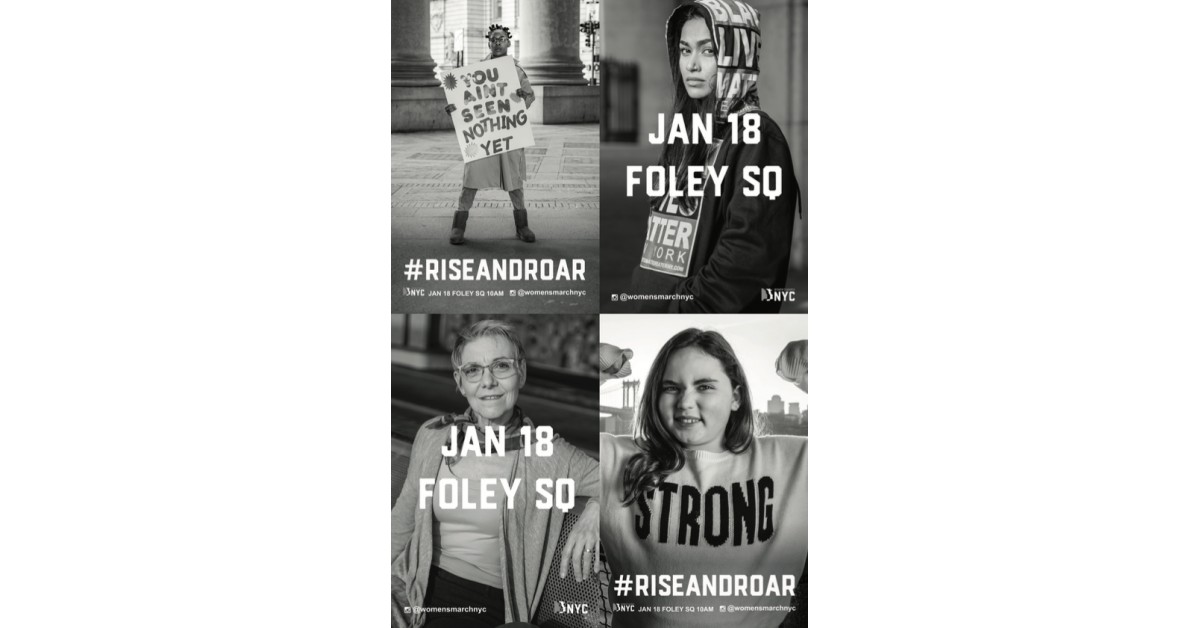 NEW YORK, January 16, 2020 (Newswire.com) – Women’s March NYC releases an emotional call-to-action, ahead of its Jan. 18, 2020 rally in New York City. This year’s theme to Rise and Roar was a culmination of partnership, unity, and solidarity, with a goal to join the two women’s march groups of New York City.

Two rallies, with performances and speakers, will take place simultaneously beginning at Foley Square (10 am – 1 pm) and Columbus Circle (10:30 am – 1 pm).

Ahead of the #RiseandRoar rallies, Women’s March NYC released a powerful and emotional video, as well as the topics and issues most fundamentally important to the movement.

The new leadership of Women’s March NYC and Women’s March Alliance came together to unite the sister marches of New York City, in order to focus their goals on the future.

“We couldn’t be more proud of the work that has been done to bring the women of NYC together in unity for our 2020 Rise & Roar event, hosted by the Women’s March NYC and the Women’s March Alliance,” says Julia Fusco-Luberoff, Executive Director, Women’s March NYC. “We need women and allies to commit to dismantling oppressive systems and working together to make sure we all have a seat at the table. If the table is too small to fit all our voices, we just build a bigger table.”

“As we commence a new decade, we RISE & ROAR and have our voices heard across New York City, recognizing the courageous women who continue to speak out on the issues of economic rights, equal rights and equal justice for women,” said Sulma Arzu-Brown, WMA March Co-Chair. “We are thrilled that the 2020 Rise & Roar Women’s March is mutually hosted by our Women’s March Alliance and the Women’s March NYC. Together, on the streets of New York City, we Rise & Roar for justice, equity, and unity.”

Women will have a choice of which location to rally at before both marches leave their locations to meet up in Times Square for a symbolic joining of a Sustainable Sisterhood, a term coined by Michele Sampson.

Speakers and performers are lined up to represent a variety of issues at each of the rallies. Amongst them is the youngest speaker in the four years of the Women’s March, 14-year-old Marley Dias. Dias is a teen activist who started the #1000blackgirlbooks campaign when she was in

The team unveiled their official campaign, including print

Advertisement
and video assets, that portrays New Yorkers powerfully standing by statements of issues they are passionate about.

“There is no room for hate at the Women’s March,” says Caroline McKinnon, Women’s March NYC Co-Chair. Autumn Trafficante, a transgender woman recently announced as the official emcee at Foley Square, states, “It is an honor to have the opportunity to remind us all that times are changing.”

“This event is only the beginning. We are taking the Women’s March online. We need to focus on getting out the vote all the way to November,” states Lisa Chin Mollica, who serves as the Lead Strategist for Women’s March NYC and the official Instagram platform @womensmarchnyc. “We need to share research, tell stories, and come together. We need to flood the internet with women.”

Women’s March NYC welcomes everyone to walk together in peace and unity, demanding a better future for all women. Shoulder to shoulder, we RISE & ROAR! Sponsors include Vote In or Out and Planned Parenthood.

Julia can speak on the following hot topics: